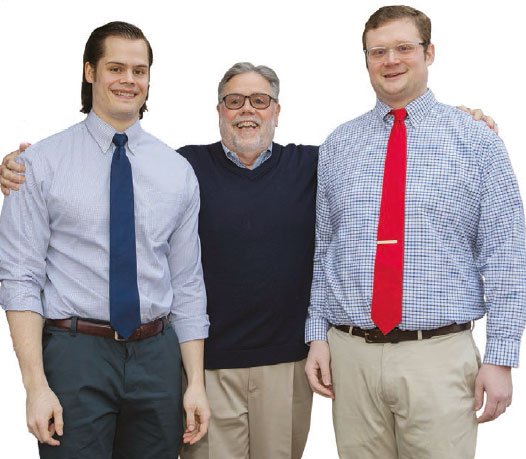 With its storied past and dynamic present, this Alexandria restaurant is moving toward a bright future

In 1973, The Wharf restaurant ran an ad in the Alexandria Gazette: bartender wanted, degree required. Fresh out of Old Dominion University, Alexandrian Ralph Davis thought, “I have a degree, I could be a bartender—it would be fun.” He got the job, despite having no bartending experience, and planned to stay for the summer, then go on to graduate school. But before summer’s end, The Wharf’s owners, Cline Enterprises, offered him a management position.

“The worst reason to major in something in college is if you like it,” says Davis. “I had a political science degree, which doesn’t open a lot of doors, but I liked it.” He stayed at The Wharf for six years, still not thinking that it would become his career.

Cline Enterprises also owned The Warehouse and, in 1979, they opened Two Nineteen, promoting Ralph to be the new restaurant’s general manager. Two Nineteen would be a Creole and Cajun restaurant.

During the year the restaurant was built out, Davis filled numerous jobs for the company, including at The Warehouse, where his soon to be wife, Kris Graef worked.

He went to New Orleans to learn Creole cuisine, to the company’s Richmond wine shop to learn wine, and sometimes laid tile or pushed a broom at the Two Nineteen construction site. “I was non skilled labor so I got the worst jobs,” he says, “but I learned how to open a restaurant.

“At Two Nineteen, we had a maître d’ in a tuxedo, we flambéed desserts tableside, we had a great Sunday brunch, great music. On weekends, the bars downstairs and upstairs were full, the dining room was full.

I stayed there until 1985, but by ’83 or ’84 I realized that I was the general manager of their flagship restaurant, but there was no place for me to go. To make a career out of the restaurant business, you almost have to be an owner.”

RT’s Restaurant* is the Davis’s family-owned gem in an unassuming white brick building on the north end of Mount Vernon Avenue. Opened in 1985, RT’s is one of only a few very long running Alexandria restaurants still under original ownership.** It is consistently one of the highest rated restaurants in Alexandria, and reviewed in print and online to be among the best Cajun restaurants in the DC metropolitan area.“And yet,” says Davis, “a lot of people tell us they’ve passed by this building for years and never thought to come in. I get it. The front looks like a tavern.” Still, he adds, “2017 was the best year we’ve ever had.”

It didn’t start out that way

Before Davis acquired the location that is now RT’s, it housed a pizza and spaghetti restaurant called Burnell’s that had been good in its heyday but, by 1985, the owner had “run out of gas. He was probably my age now,” says Davis, “but he was tired, hanging on by a thread, and he just wanted to sell.”

The Davises, however, were wary of the Arlandria neighborhood. “It was a pretty rough crowd down here back then,” he says. Some folks told him they simply didn’t want to go there. Ralph told Kris that he would stay at Two Nineteen.

But he had ownership on his mind and when, a few months later, he saw that plans were in the works to revitalize Mount Vernon Avenue, Ralph looked at Burnell’s again.

“[Revitalization] was the reason I located here,” he says. “I didn’t realize it would start at the south end of the avenue and take more than 30 years.”

RT’s opened with an “American menu,” but dining room business struggled for months.

“There was a good bar business,” Davis says, “because my contemporaries from Old Town all came and kind of chased away the bad bar business already here. Some of those customers would tell me, ‘You’re too expensive, if you raise the prices again, I’m never coming back!’ So boom! I raised them again.”

food critic, the late John Rossen, wrote an enthusiastic review. And 11 months after opening, RT’s got into the Sunday Food section of The Washington Post.

“Phyllis Richman thought we were great,” says Davis. “She wrote about everything we did. But every time anyone reviewed us, they called us a Creole and Cajun restaurant.”

RT’s first menu offered only three Creole dishes: a blackened fish, an étou­fée,, and oysters 3-ways. These were recipes Ralph developed while working at Two Nineteen, and because his connection to that restaurant was so well known, reviewers made the assumption.

But becoming the finest Creole and Cajun restaurant in Northern Virginia was not Ralph’s initial goal. “We didn’t want to be Creole and Cajun. I wanted to do my own thing.”

Still, after a year of this, Davis decided to “go with the flow” and embrace the cuisines. Working with RT’s Executive Chef Homero Escobar, they morphed the menu completely into Creole and Cajun.

Escobar came with Davis from Two Nineteen and has ruled the kitchen since. “He’s the most consistent person I have ever worked with,” Ralph says. “When we develop a recipe the way we like it, it never changes.”

Davis attributes the quality of RT’s food to the restaurant’s smaller size: capacity of only 110 persons. “When I owned The Wharf and The Warehouse, we were doing 400 dinners on Friday and Saturday nights and we had five people cooking behind the line,” he says. “We’re not as busy here; it’s more hands-on. The chef touches every dish.”

Chef Escobar is not the only long-term staff­ member. “I’ve been very lucky that folks have stayed with me for many years,” says Davis. “That’s one reason we’re successful: the managers, the chefs, the cooks that worked hard to make the business succeed.

“My wife Kris played a huge part in our early success.

She worked at RT’s in the early days as a manager and bookkeeper. Those were heady times for our family: we got married, quit our jobs, had a baby, and opened two restaurants*** in less than three years.”

Also Kevin Bacon and Kris Kristo­fferson have made appearances. “But,” says Davis, “our stock in trade is the politicians.”

“[Secret Service] had German Shepherd dogs walking the neighborhood, people with guns across the street,” says Davis. “They were at the back door, at the entrance, in the kitchen watching us cook. They didn’t keep anybody from coming in, but they did that wand thing.

Seven or eight people [in an adjacent room] had a box with a phone in it.

“When [Bill Clinton] came in, the restaurant was full of Republicans. In the early years we had a lot of retired military, people from the Pentagon and from Arlington, very conservative, very Republican.

Well, Bill went around to every table, spoke to everybody, and when they left he got a standing ovation.

“I was nervous, so I just sat at the end of the bar and I’ll never forget, the guy next to me was from Green Bay, Wisconsin. He goes, ‘Oh my God, this is so exciting! How often does this happen?’

More congressmen followed, and it continues today. Alabama Congressman Mike Rogers has “almost a standing reservation here; he brings 25 or 30 people in every other month.” John Boehner was a “good customer.” Speaker Ryan, with Secret Service, appeared recently with other Members.

“For a hole in the wall on Mount Vernon Avenue,” Davis says, “I suspect we’ve had more Secret Service here than any restaurant in Alexandria.” There are no pictures of celebrities on RT’s walls.

Décor is a display of shadow boxes by then-local artist Brian McCall, depicting RT’s and the avenue’s history. “I could’ve filled the walls [with photos], but we didn’t want to be like everybody else. Especially with the political people, we thought one reason they came here was for anonymity. They feel comfortable here.”

Privacy is even stronger these days. When Ralph’s son, Matt, manages the restaurant at night, he isn’t into people watching. “Most of these people come at night,” says Davis, “and my son will tell me, ‘somebody was here, I think they’re famous,’ or ‘there was someone here with Secret Service’ and I’ll go, did you find you who was it? And he’ll say ‘no.’”

Emeril and The Food Network

The Food Network launched in November 1993 and filmed one of its first segments at RT’s. At that that time, the Food Network wasn’t even available in Alexandria.

Then late in 1996, when Emeril Lagasse’s second cookbook, Real and Rustic came out, the chef toured restaurants to build his following. RT’s was invited to host the tour and to cook Emeril’s food (under the watchful eye of Emeril’s sous chef), while the chef signed cookbooks and schmoozed with his fans.

The night before, Chef Larry Forgione’s restaurant, An American Place, had hosted the tour in New York City.“After ward,” says Davis, “their sous chef told our chef that of all the places they did these dinners, we did the best job of interpreting [Emeril’s] food. A lot of our customers,” Davis adds, “said, ‘Boy that food was good, but your food is just as good.’”

Looking to the future

Ralph Davis would eventually own and operate six restaurants, including The Wharf and The Warehouse, and then sell five. “I didn’t sell five restaurants because they weren’t doing well,” he says.

“I wanted to sell them before they weren’t doing well.” But of RT’s, he adds, “We’ve been here the longest; this is kind of my baby.”

Another reason Ralph didn’t sell RT’s is that Matt Davis works there. “I want to give him the opportunity to do this, if he wants to,” says Ralph.

“He’s a smart kid, he’s 27, and our other manager, Jake Staples, is Matt’s best friend since elementary school. So I’m working with two young guys.

“I’ll be 70 in October and I like still being involved, having a purpose. I’m trying to learn golf, which is tough at my age, but I want to have some activity because my fallback position is to come to work. I tell the kids, okay I’m going to play golf, you won’t see me. Which they don’t mind, I think.

“If Matt wants to do this, I’d like RTs to continue for another generation. Business is on the uptick. And I’ll tell you, when RT’s captures people, we capture them. If they haven’t eaten here, it’s self-serving for me to say this, but 98 percent of the people who come here are very satisfied and they come back.”

*Ralph Thomas Davis was called RT in college. During renovation a college friend answered the pay phone at the restaurant, “RTs, can I help you?“ The name stuck.

**Other longest-term owners are the Landini Family, of Landini Brothers Restaurant, and the Chaufour Family, who opened Le Refuge in 1983.

***Davis opened RT’s in 1985 and bought The Warehouse in 1987. He would go on to buy four more restaurants including The Wharf.